The makers of Shivalinga have achieved a first in Sandalwood — a full-fledged premiere before an audience in London. According to its makers, the film’s team has been invited by Reubin Raj Productions in London for a screening to an audience of 650, mostly Kannadigas, at Safari Cinema Harrow on March 19.

“I am glad. This is the first time a Kannada film has been invited. The organisers are planning the screening in a big way, having seen the positive reviews and collection. Shivarajkumar and a few others from the team will be there with me as guests and meet the audience,” says an excited P Vasu, the film’s director.

The director thinks such screenings are provide ample exposure to the Sandalwood market. “There are many Kannadigas living abroad, and the only way we can connect with them is through cinema. This will also help Kannada films grow in the overseas market. That’s one of the reasons we want to be there,” he says.

Vasu says certain big banners have come forward for the film’s remake rights. “I can’t give out many details until everything gets confirmed. I have been offered to do Shivalinga in Hindi, but with whom is yet to be decided,” he says.

Shivarajkumar will be felicitated by Basava Foundation on March 20. 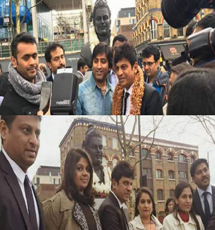 Shivarajkumar has made all of us proud. The Century Star of Kannada film industry was felicitated on March 19, in front of […]